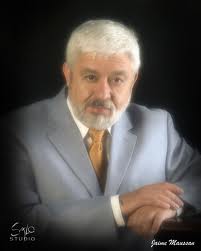 Jaime Maussan studied journalism at the UNAM and the Miami University in Ohio, United States.

Since 1970 he has practiced his profession as a reporter in the following ways: El Sol de México (Mexico’s Sun), Diario “La Afición” (Diary “The Hobby”), 24 Horas (24 Hours), W Radio, XEX Radio and Televisa, among others.

Within highlighted Televisa correspondent in the United States, General Information reporter Domingo a Domingo (Sunday to Sunday) program with Jacobo Zabludovsky, General Coordinator and director of sixty stories for the same program.

The works that helped Jaime become known as an outstanding reporter and researcher, took place within the television program “60 Minutos” (“60 Minutes”) where he did research on environmental and social reporting, was the series of reports “Génesis y Apocalipsis” (“Genesis and Apocalypse”), Mexico and the world by the year 2000, which marked the path to Jaime Maussan as one of the most important journalists and researchers, winning over 14 awards in the world, within most notably, the World Institute Award UN Population granted to a selection of more than 7,000 jobs, delivered at the Mike Mansfield Room of the Capitol in Washington D.C. in the United States. Award “Gustavo Alatriste” for the production of “Los Niños Drogadictos” (“Children addicts”) in 1993, also presented at the Festival de Cannes, France. Award Ondas in Barcelona, Spain for “Monarca, Reina de las Mariposas” (“Monarch Butterfly Queen”) and award in Banff in Canada in 1979 and 1980, respectively, among others.

The following list is also available on his homepage:

If you enjoy hanging out with intellectual people, have an open mind, and can think outside the box, then save the date – May 18-20. The … END_OF_DOCUMENT_TOKEN_TO_BE_REPLACED

Collective Evolution has recently posted a video interview with Former Senator Mike Gravel by John Fugelsang on Current.com's "Viewpoint." This 8:36" video and accompanying article offer excellent, credible information on the topic of UFO disclosure. "This is a global issue, … END_OF_DOCUMENT_TOKEN_TO_BE_REPLACED