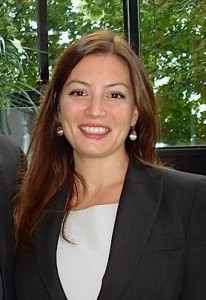 Esen Sekerkarar is an international speaker, researcher and organiser in the areas of self-development, spirituality and consciousness.

She was born in Izmir, Turkey in 1977. She graduated from Istanbul University where she studied Language and Literature of Latin. She got highly involved in Ufology in 1998 and she worked at Sirius UFO Space Sciences Research Centre from this date to 2002 as the secondary leader of the organisation. The Centre is Turkey’s first such centre collecting all kinds of data on the subject throughout the country and conducting intense research on them. It has organised three International UFO Symposiums of Eastern Europe, Balkans and Middle East in Istanbul to which worldwide researchers and scientists attended as speakers. The first conference in 1999 attracted around 4500 people in two days. During this time, she was also the co-writer of the weekly documentary TV programme called “UFO Reality”, which was broadcast on one of the national TV channels. Her articles appeared in worldwide magazines and journals. She is also one of the three founders of the International UFO Museum, which was opened in January 2002 in Istanbul, becoming the first such museum of the country.

Esen first started lecturing at UFO conferences internationally in 2002. In 2005, she was listed amongst ‘The 100 Most Influential People in Ufology’ by FATE Magazine. She was also “MUFON Respresentative for Turkey” for several years. Her current lectures focus more on the spiritual side of the phenomenon.

Esen’s continuous interest in spirituality, consciousness and self-development inspired her to attend various courses and lectures since early ages. She attended the courses and retreats of world’s well known names in spirituality and worked with various mentors. She founded “Conscious Life Works” in 2014 in order to share knowledge and tools that would help us all towards a conscious and enlightened human evolution.

Esen received a standing ovation for her presentation at the 2014 StarworksUSA UFO Symposium in Chicago, Illinois. We are thrilled to have her join us in Laughlin in 2016.

For more information on Esen Sekekarar and her work, please see her website, www.consciouslifeworks.com

Collective Evolution has recently posted a video interview with Former Senator Mike Gravel by John Fugelsang on Current.com's "Viewpoint." This 8:36" video and accompanying article offer excellent, credible information on the topic of UFO disclosure. "This is a global issue, … END_OF_DOCUMENT_TOKEN_TO_BE_REPLACED