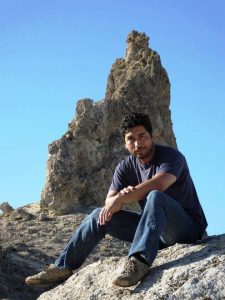 “We are here living on this planet like Acupuncture needles, located in specific locations for a reason… perhaps to heal the EARTH.” – Enrique Villanueva

Enrique has always been interested in the mind and how to overcome limitations using the potential of the subconscious. He had his first sighting at the age of seven. His professional journey began in Peru while studying at the University of Lima. His search on the traditional medicine of the Shamans from the coast and rainforest of his native country, took him to the exploration of meditation and other disciplines of the mind, and much later to the classrooms of the Hypnosis Motivation Institute.

Now through the practice of Hypnosis and Neuro Linguistic Programming, Enrique shares his knowledge with the main Hispanic television and radio networks of Southern California (Telemundo, Azteca America, Univision, etc), concentrating his efforts in transforming the quality of life of his community.

In addition, Enrique Villanueva is the author of three books published in the Spanish language, and a well known motivational speaker for the Latino community of the Los Angeles County, California area.

Collective Evolution has recently posted a video interview with Former Senator Mike Gravel by John Fugelsang on Current.com's "Viewpoint." This 8:36" video and accompanying article offer excellent, credible information on the topic of UFO disclosure. "This is a global issue, … END_OF_DOCUMENT_TOKEN_TO_BE_REPLACED