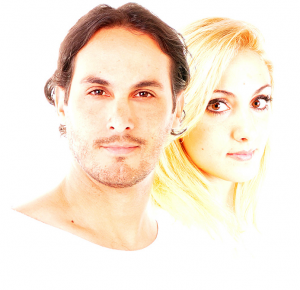 Mintaka was born at the end of 2010, when Sol Sanfelicé, actress and singer in Argentina music, and Ricardo González, writer, musician and composer, were reunited in Madrid.

Based in Buenos Aires, they start creating the material from their first album, Humano (“Human”), which was released in November 2012. The album was recorded and mixed in the studio Mintaka and mastered by renowned sound engineer Andrés Mayo, who it will be involved in all future work Mintaka. Humano with its electronic sound and the message of the lyrics, reached thousands of people. Weeks later, an EP with five songs (“electronic soul”), a market dominated by the sound of synthesizers album was released.

Shortly afterwards, in July 2013, they edited Mantra, an album that hangs over sounds and deep textures, led by the magic of Sol voice evoking words of power and old songs. Mintaka this work begins to consolidate in the genre of the music meditation with mantras. In fact, the name “Mintaka” is a message: it comes from one of the stars of Orion’s Belt, the only one that can be seen both in the southern hemisphere and the northern hemisphere, as if it were a space marker.

His next work, Irdin: The Journey, released in April 2014, continued in the way of the mantras of power, sung in a mystical language called “Irdin”: a code of touch with yourself and other realities.

With the release of Mir, in May 2015, Mintaka reached the zenith of cosmic music. The exploration of space sounds and melodies that touch the most intimate is the hallmark of this work.

Mintaka is a musical alternative unprecedented recorded songs dedicated to the Russian painter Nicholas Roerich, the electronic genius Nikola Tesla, or mantras widely as “Sun Discs,” “Zin-Uru” or missing songs that connect with “Erks Lights” in the Uritorco. His songs have reached thousands of people around the world.

Mintaka is music, art and consciousness.

Collective Evolution has recently posted a video interview with Former Senator Mike Gravel by John Fugelsang on Current.com's "Viewpoint." This 8:36" video and accompanying article offer excellent, credible information on the topic of UFO disclosure. "This is a global issue, … END_OF_DOCUMENT_TOKEN_TO_BE_REPLACED