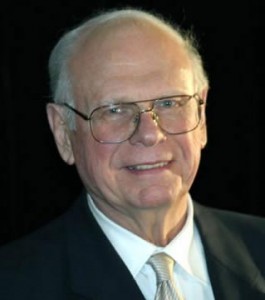 Paul Theodore Hellyer, PC is a Canadian engineer, politician, writer and commentator who has had a long and varied career. He is the longest serving current member of the Privy Council, just ahead of Prince Philip. First elected as a Liberal in 1949 federal election in the riding of Davenport, he was the youngest person ever elected to that point in the Canadian House of Commons.  When the Liberals came into power in the 1963 election, as Minister of Defence, he oversaw the drastic and controversial integration and unification of the Royal Canadian Navy, Canadian Army, and the Royal Canadian Air Force into a single organization, the Canadian Forces.

Peace in space and UFO advocacy

On 3 June 1967, Hellyer flew in by helicopter to officially inaugurate an Unidentified flying object landing pad in St. Paul, Alberta. The town had built the landing pad as its Canadian Centennial celebration project, and as a symbol of keeping space free from human warfare. The sign beside the pad reads:

“The area under the World’s First UFO Landing Pad was designated international by the Town of St. Paul as a symbol of our faith that mankind will maintain the outer universe free from national wars and strife. That future travel in space will be safe for all intergalactic beings, all visitors from earth or otherwise are welcome to this territory and to the Town of St. Paul.

Throughout his life, Hellyer has been opposed to the weaponization of space. He supports the Space Preservation Treaty to ban space weapons.

In early September 2005, Hellyer made headlines by publicly announcing that he believed in UFOs. On 25 September 2005, he was an invited speaker at an exopolitics conference in Toronto, where he told the audience that he had seen a UFO one night with his late wife and some friends. He said that, although he had discounted the experience at the time, he had kept an open mind to it. He said that he started taking the issue much more seriously after watching ABC’s Peter Jennings’ UFO special in February 2005.

Watching Jennings’ UFO special prompted Hellyer to finally read U.S. Army Colonel Philip J. Corso’s book The Day After Roswell, about the Roswell UFO Incident, which had been sitting on his shelf for some time. Hellyer told the Toronto audience that he later spoke to a retired U.S. Air Force general, who confirmed the accuracy of the information in the book. In November 2005, he accused U.S. President George W. Bush of plotting an “Intergalactic War”. The former defence minister told an audience at the University of Toronto:

“The United States military are preparing weapons which could be used against the aliens, and they could get us into an intergalactic war without us ever having any warning…The Bush Administration has finally agreed to let the military build a forward base on the moon, which will put them in a better position to keep track of the goings and comings of the visitors from space, and to shoot at them, if they so decide.”

Hellyer told the audience that in December 2004, he had enjoyed reading and had endorsed a book by Alfred Webre entitled “Exopolitics – Politics, Government and Law in the Universe”. He ended his 30 minute historical talk with a standing ovation by stating:

“To turn us in the direction of re-unification with the rest of creation the author is proposing a “Decade of Contact” – an “era of openness, public hearings, publicly funded research, and education about extraterrestrial reality”.”

In 2007, the Ottawa Citizen reported that Hellyer is demanding that world governments disclose alien technology that could be used to solve the problem of climate change:

“I would like to see what (alien) technology there might be that could eliminate the burning of fossil fuels within a generation…that could be a way to save our planet…We need to persuade governments to come clean on what they know. Some of us suspect they know quite a lot, and it might be enough to save our planet if applied quickly enough.”

Collective Evolution has recently posted a video interview with Former Senator Mike Gravel by John Fugelsang on Current.com's "Viewpoint." This 8:36" video and accompanying article offer excellent, credible information on the topic of UFO disclosure. "This is a global issue, … END_OF_DOCUMENT_TOKEN_TO_BE_REPLACED