You are here: Home / Blog / My Experiences with the Bosnian Pyramids 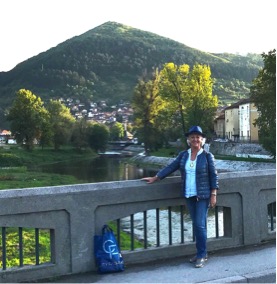 As a representative of the Bosnian Pyramids for Spain and Latin America since 2011, I have learned a lot and I have been visiting the Valley of the Pyramids ever since, at least once or twice a year.

After volunteering in August 2011, I realized that among many volunteers from many countries in Europe and from all over the world who were there, I was the only person from Spain. That surprised me and when I returned to Barcelona, I found out that nobody had ever heard about them. That’s when I decided to spread this amazing discovery in Spain, Latin America and the Spanish speaking community worldwide.

I started to create a website and a Facebook page, I invited the discoverer of the Bosnian Pyramids Dr. Sam Semir Osmanagich to come to give a lecture and a workshop in Barcelona in April 2012, and I presented him to several radio stations, magazines and websites. This was the beginning, and this gave us a great and enthusiastic response, in Spain, throughout Latin America and USA. Since then, hundreds of people have been coming, not only as volunteers, but also many tourists and a number of travel groups.

A bit about myself: As a somewhat polyglot person, I had an Austrian father and a Spanish mother, having been born in Spain. When I was 8 months, we travelled to live in South America, first to Venezuela and then to Chile. After 15 years, me and my family then returned back to Europe. I finished my primary studies at the German school in Bilbao and then we moved to Germany, where I trained as an International Portraitist / Painter, www.birgitteknaus.com. This led me later to live in London, München, Paris, South of France, again London, Ibiza and Barcelona while also traveling to many continents, specially to the USA to follow up with my portrait commissions. I also had several art exhibitions in many different countries.

I speak five languages and this has done me very well, firstly to communicate with my international clients and portrait sitters and later on to make the necessary translations and as an interpreter, to be able to divulge what is coming out as the latest and archaeological discoveries, not only in Bosnia, but also around the world. This is changing history as we knew it. Nothing we got thought in schools concerning history is true, and this is what is coming out and proven through the latest archaeological findings worldwide.

We are living in very interesting and exciting times of great changes, in which everything that has been hidden from us for the last thousands of years is finally coming to light, this way discovering little by little our true secret and forgotten history of humanity and our planet.

I could write a book, only about all my wonderful experiences that I have had in Bosnia, a country that I carry with much love in my heart. It has been a great honour and pleasure to have been chosen to be the representative of the Bosnian Pyramids by the discoverer and our hero Dr. Sam Osmanagich, who we call our true European Indiana Jones. I think after almost 7 years as a volunteer, publishing all the latest archaeological discoveries, scientific, healing and spiritual researches about the Valley of the Pyramids in Bosnia, with its 5 pyramids, 2 tumuli, the enormous network of tunnels and the two Stone Sphere Parks north of Visoko, also having given several lectures in Spain and Mexico, and acting as an interpreter for Dr. Sam Osmanagich, I am glad to know that the seeds we have sewn are now bearing fruit. Now there are millions of more people who know about the existence of the highest, oldest and best oriented pyramids in the world, which are found in the small country of Bosnia, in the heart of Europe.

To find out about all this, you can visit our Spanish website: www.piramidesdebosnia.com

I also invite you to come and experience the wonderful and powerful healing energy and beauty of the Valley of the Pyramids of Bosnia as volunteers, visitors to our Tours and Conferences or as tourists. You are all very welcome!

You can contact me at: piramidesdebosnia at gmail dot com

Collective Evolution has recently posted a video interview with Former Senator Mike Gravel by John Fugelsang on Current.com's "Viewpoint." This 8:36" video and accompanying article offer excellent, credible information on the topic of UFO disclosure. "This is a global issue, … END_OF_DOCUMENT_TOKEN_TO_BE_REPLACED