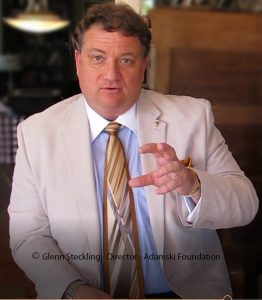 Glenn Steckling, the Director of the sixty-year-old George Adamski Foundation, one of the oldest enduring UFO organizations, discusses his family’s extensive history within the UFO field, and their association with George Adamski. This includes the Steckling family’s pioneering Lunar anomaly research from the 1970s & 80s; and his concerns regarding the developing agendas of misinformation focused on the revisionism of UFO history and perceptions. Glenn’s parents, the late Fred Steckling and his wife Ingrid, were personal friends and selected coworkers of George Adamski – considered by many as “The Pioneer” in the early UFO Contactee field.

Fred Steckling’s first book, Why Are They Here: Spaceships from Other Worlds, published by Vantage Press in 1968 is considered by many as a classic in this field. His second 1981 book, We Discovered Alien Bases on the Moon – composes research many have attempted to copy since, but never have successfully matched – and it continues as one of the foremost publications into the lunar anomaly investigation. (revised and expanded into Alien Bases on the Moon 2 by Glenn in 1997; now well into its eleventh publication). In 2015 Adamski’s third book, Flying Saucers Farewell from 1961, was re-released and expanded by the Foundation into its new paperback title “Behind the Flying Saucer Mystery 2”, which includes 55 new pages of data, research, and references, including an entirely new photographic section added.

Because of the Steckling Family’s association with Adamski, and the resulting UFO program and materials inherited from him, the late Fred Steckling was active in Ufology from the early 1960’s throughout remainder of his lifetime until his passing in1991. Both proactive personalities in this field, Fred and Ingrid Steckling were invited by Dr. Lowman to address a panel of 22 scientists at NASA’s Goddard Space Center in 1967. Afterwards also to brief Colonel Freeman and his staff at the Pentagon. His commitment to this subject included numerous appearances such as Life with Linkletter, Voice of America, National T.V and radio in Japan, Australia and Germany, a 1984 address before a Select Committee of Britain’s House of Lords sponsored by Lord Clancarty, and numerous University and worldwide media events. Due to Mr. Steckling’s 1978 correspondence and photos submitted to Prime Minister Sir. Eric Gairy of Grenada, a vocal supporter of UFOs in the United Nations, some of the first issue UFO stamps were released.

As a result of this history and participation through Adamski & his parents, Glenn Steckling’s involvement within the UFO subject also spans nearly his entire lifetime as well. His partnership alongside his parents, connection to Adamski Coworkers, and network of researchers worldwide, plus his tenure as Foundation Director over the last 25 years, has helped to formalize his background in this field. Glenn has spoken in numerous countries and media events as well, and continues to actively voice his concerns regarding the imbalances from both within and without the UFO community which  contribute to an ever-escalating series of misrepresentations plaguing this subject. His presentations include archival documentation, original Adamski UFO photos and re-mastered motion picture footage, and newly released rare personal Adamski home movie footage. Also included are 1970’s first -generation copies of NASA photographs from the Moon, along with 1966 movie footage of an array of UFOs taken by his father while traveling on lecture tour by train through Germany.

Glenn Steckling, a professional Aviator with more than 30 years flying experience and 20,000 hours plus of flight time across the globe shares his own unique UFO background, history, and experiences. He maintains an expanding UFO archive and research program, and remains focused and resolute concerning the importance of preserving and educating the public regarding “accurate” historical records, documentation, scientific fact verses science fiction, the vital importance and progressive benefits of Extraterrestrial visitations, with a significance of the Adamski legacy.

Collective Evolution has recently posted a video interview with Former Senator Mike Gravel by John Fugelsang on Current.com's "Viewpoint." This 8:36" video and accompanying article offer excellent, credible information on the topic of UFO disclosure. "This is a global issue, … END_OF_DOCUMENT_TOKEN_TO_BE_REPLACED