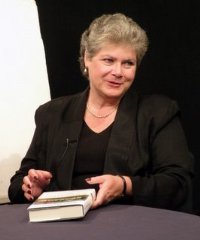 Andrea Perron is the author of the trilogy House of Darkness House of Light. These books chronicle the life she shared with dead and living alike in a Colonial era farmhouse in Harrisville, R.I. Born in 1958, at the age of twelve her parents purchased the Arnold Estate, beginning an incredible journey beyond the realm of reality as most perceive it to be. A collective memoir, it details the encounters experienced by each and every member of her family. Seven mere mortals spent a decade exploring the vast expanse of possibilities which exist beyond the five senses, employing the sixth for clarity.

Andrea received an interdisciplinary degree in English & philosophy from Chatham College in 1980 and two weeks later, left the farm with her family, moving to Georgia in June of that year. She has since owned two businesses and spent nearly a decade as a counselor before abandoning her career to tell this story, to write the books she believes she was destined to write. She lives quietly with her mother in rural Georgia where she continues her work. She is a human rights advocate, an animal rights activist and an outspoken member of the world community which she insists needs to be saved from themselves. Visit her YouTube channel & website for more information.

HOUSE OF DARKNESS HOUSE OF LIGHT

“House of Darkness House of Light” is no ordinary ghost story. It is a collective memoir, expansive in scope. It is essentially a cosmic love story. Anyone unprepared for its darkest contents should choose less dense material, according to the author, as this series of books functions as “interactive literature.” It is not written to be horrifying, though it has that effect on some readers. Instead, it is meant to be read and assimilated, absorbed slowly and deliberately, like a lengthy lamentation or a spiritual meditation.

It takes the reader on a decade-long journey through the darkness and into the Light of higher consciousness, imbuing the participating reader with a heightened level of awareness in the process. No one leaves its pages unaltered by the experience, as was the family who had the encounters originally.

The Perron family purchased the farmhouse in 1970 and spent the next ten years discovering that good and evil are in a perpetual state of war and there is something beyond our mortal existence. It poses far more questions than it answers and forces the reader to ponder some uncomfortable concepts. Andrea describes the place as a portal cleverly disguised as a farmhouse! It is a place where time and space stand still and become irrelevant to the encounter — shared space. It is a window to the past and future alike, a point of epiphany for those who are capable of comprehending its contents. Death is not the end and may, in fact, be only the beginning.

The Perron family waited more than thirty years to tell their tale of darkness and light. They had to process what occurred in their home, in their lives, and the world had to be ready for what they had to share with its people. As Carolyn the matriarch of the family explains: “This is not the kind of thing one should rightfully take to the grave.” It requires courage and an open mind but by all accounts, the world IS ready for “House of Darkness House of Light.”

The film “The Conjuring” tells the story in broad, sweeping strokes, painting a picture of the struggle between good and evil, the triumph of love over fear. The fine lines of history are etched upon the pages of this extensive manuscript. Many elements of the film were fictionalized but the books tell the whole truth. “The Conjuring” was based on the investigative case files of Ed and Lorraine Warren. The books come directly from the source, the entire family who experienced these supernatural shenanigans, some of which were more severe than anything represented on film. This is a classic case of the truth being stranger than fiction.

If you enjoy hanging out with intellectual people, have an open mind, and can think outside the box, then save the date – May 18-20. The … END_OF_DOCUMENT_TOKEN_TO_BE_REPLACED

Collective Evolution has recently posted a video interview with Former Senator Mike Gravel by John Fugelsang on Current.com's "Viewpoint." This 8:36" video and accompanying article offer excellent, credible information on the topic of UFO disclosure. "This is a global issue, … END_OF_DOCUMENT_TOKEN_TO_BE_REPLACED