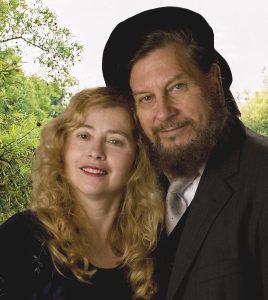 J.J. Hurtak, Ph.D. and Desiree Hurtak, Ph.D. are social scientists, futurists and founders of The Academy For Future Science. They have been researchers in the field of UFO study for over 40 years. They were scientific consultants for Sidney Sheldon’s bestseller of an alien encounter titled The Doomsday Conspiracy, working closely with Astronaut Gordon Cooper. They are on the Board of Directors with FIONS (Friends of the Institute of Noetics) associated with their colleague, the late Astronaut Edgar Mitchell.

Dr. JJ Hurtak along with Dr. John Mack and Dr. Scott Jones was a presenter at the first government disclosure on ET intelligence in Washington DC (1995), When Cosmic Cultures Meet.

In 1977 he was a presenter at the First World Congress on OVNIs in Acapulco Mexico with J. Allen Hynek, and the first to give a detailed description of EBEs (Extraterrestrial Biological Entities) to the world press (El Universal) in Mexico City. He gave personal briefings to the government of Mexico and encouraged Jaime Maussan to investigate UFOs in the late 1970s. The Hurtaks are recognized for their development of a new ET based cosmology.

They are also well known for their films on conscious evolution, including Merkabah, The Light Body, Gateways to the Light, and Voice of a Zulu Shaman: Credo Mutwa for which they have received numerous film awards. Among the films Dr. J.J. Hurtak has appeared in as a UFO expert are The Hidden Hand by James Carman and Packing for Mars by director Frank Jacobs and Screen Addiction’s Tonia Madenford.

Collective Evolution has recently posted a video interview with Former Senator Mike Gravel by John Fugelsang on Current.com's "Viewpoint." This 8:36" video and accompanying article offer excellent, credible information on the topic of UFO disclosure. "This is a global issue, … END_OF_DOCUMENT_TOKEN_TO_BE_REPLACED