The Global Radio Alliance is a new radio network spearheaded by a collective of radio hosts with many years of experience between them in commercial, terrestrial, and net radio.

The Global Radio Alliance aims to be in prime position to take full advantage of this progressive and exciting time for net radio broadcasting. Internet radio is in its infancy – it currently boasts 54 million listeners per month – but listenership increases significantly every year while terrestrial radio continues to lose both its relevancy and its market share. The term “UFO” is one of the most searched terms on the world wide web, so we know there is enormous interest in the subject. G.R.A. focuses on the paranormal and UFO subject as well as making regular forays into other related realms to provide a broad cross-section of paranormal shows for people of all ages, tastes, and interests around the world. 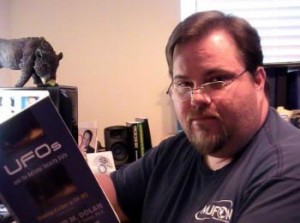 Race has researched and investigated the UFO Phenomenon for over 20 years. In 1990, he was a witness to something very unusual over south Ft Smith, he was not sure what it was, but it was something that he had never seen before that spawned his curiosity in to the UFO subject! He started The Ft Smith Arial Phenomenon Research Group in 1992 and began officially Investigating sightings in the River Valley Area. Today, his passions include Family, Investigating the UFO Phenomenon, being in nature Sky Watching & Amateur Astronomy and his newest venture, Creating Eye Witness Radio with Royce!

“One of the most rewarding parts of my volunteer life is working with The Mutual UFO Network!” Race has been with MUFON going on 4 years now and he is Currently the State Section Director and International Field Investigator for the West Central Section of Arkansas MUFON… Race really enjoys volunteering for MUFON and Researching the UFO subject and has met some of the finest human beings out there as a result of Joining MUFON! One of those being his best friend & Co-Host on EyE Witness Radio, Royce Fitzgerald. Race met Royce at a West Central Section Arkansas MUFON meeting Race was holding in Fort Smith where Royce revealed a sighting he had as a young boy for the first time openly to others. Race was very proud to learn about Royce’s interest in UFO’s and almost instantly, they became great friends, working together on a passion that drives them both! The UFO Subject. Read more… 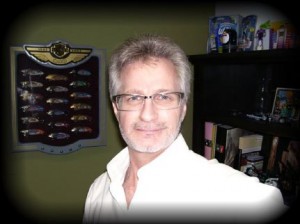 One evening in the late 1960′s Royce’s first UFO sighting occurred in West Tulsa while at a family picnic. His recollection is that both he and his mother watched an object pass overhead in the darkening sky. The structure was not apparent, however, Royce remembers the ring of lights that traveled around the objects underside as it silently glided by. Since that moment he was secretly fascinated by the phenomenon and only revealed the sighting publicly at his first MUFON meeting in Fort Smith, Arkansas where he and his wife currently reside.

Section Director Race Hobbs and Royce became fast friends and together studied to become certified Field Investigators for MUFON, and did pass the test to receive certification in May 2011. Committed to the MUFON mission of “analytical and scientific study of UFOs for the benefit of humanity”, Royce is active in efforts to increase awareness and membership for the Arkansas West Central Section, as well as investigating UFO reports in the local region. Read more…

Collective Evolution has recently posted a video interview with Former Senator Mike Gravel by John Fugelsang on Current.com's "Viewpoint." This 8:36" video and accompanying article offer excellent, credible information on the topic of UFO disclosure. "This is a global issue, … END_OF_DOCUMENT_TOKEN_TO_BE_REPLACED