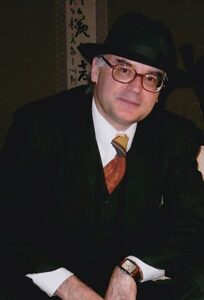 Michel Zirger is a ufologist and has lived in Japan for over 20 years. He is THE French specialist of George Adamski and George Hunt Williamson. He seeks to make these two contactees of the ufology scene better known. Michel Zirger has, moreover, many documents on Adamski and part of Williamson’s archives.

He wrote several articles for the magazines “Top Secret”  and “Science and unexplained”. He also collaborates in various ufology publications in the Japanese and Anglo-Saxon ufology world. He is the author of the first comprehensive biography on George H. Williamson, published in Italy under the title  “Extraterrestri: il contatto è già avvenuto. Saggio biografico su George Hunt Williamson”, the revised and expanded French version.

Michel Zirger is a contactee and recounts the adventures which led him to meet extraterrestrials in Tokyo in the magazine “Top Secret”.

If you enjoy hanging out with intellectual people, have an open mind, and can think outside the box, then save the date – May 18-20. The … END_OF_DOCUMENT_TOKEN_TO_BE_REPLACED

Collective Evolution has recently posted a video interview with Former Senator Mike Gravel by John Fugelsang on Current.com's "Viewpoint." This 8:36" video and accompanying article offer excellent, credible information on the topic of UFO disclosure. "This is a global issue, … END_OF_DOCUMENT_TOKEN_TO_BE_REPLACED